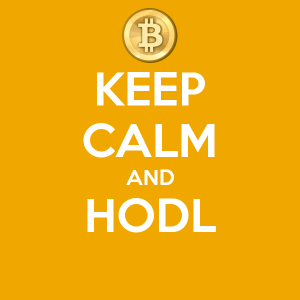 As a Bitcoin Hodler, with the price of Bitcoin lower and the market bearish, I’m often asked by nocoiner friends if I’m “worried” about my investment. This is probably to be expected, but I find it strange that they don’t ever ask me if I’m worried or concerned when the price of silver or gold goes down – or whether I’m worried about stocks I might hold that go down.  In fact, investment holdings go up and down all the time and the cryptocurrency market is no different in that regard. What is different, I suppose, is the percentage of the rise and fall – which is very volatile. It is that very volatility that I like about the crypto-market, at least for the time being. Why? #1 Because it allows the opportunity to buy low and sell high to keep increasing my holdings. #2 Because I believe the price of Bitcoin will skyrocket once mainstream adoption occurs.

An “on purpose, kinda” misspelling of “hold” – first coined in the altcoin sphere in 2013 & later said to imply “Hold On for Dear Life”. It reinforces the financial concept that you don’t sell in a Bear Market. You ride it until the bitter end, or the price comes back up. (Hint: Crypto prices usually comes back up.)

The fact is, cryptocurrency technology is in the early stages and these tremendous highs and lows continue to offer early adopters the opportunity to acquire more Bitcoin without having to lay out more cash to do so. I am not an experienced trader, so my trades are very conservative, but they have been very lucrative. I do have cryptocurrency (Bitcoin and Ethereum) being traded on my behalf by experts as a member of Titan Trade Club, and it consistently adds to my stack. As a bitcoin hodler, I am very happy with the results of membership – and am accomplishing my goal which is to acquire without spending more fiat cash to do so. I did try two other similar ventures that did not turn out as well as Titan membership, but I’m still very much “in the green” on my investments.

Yesterday, the Lightning Network Daemon (styled ‘lnd’), which enables easy access to LN for developers, represents the first mainnet beta release for the technology, which is believed to revolutionize Bitcoin’s use as a currency. This beta release is also the first release of lnd that has an option to run on Bitcoin’s mainnet, with the necessary safety, security, and fault-tolerance features required for real-world, real money usage. Ind is backed by computer giant Microsoft and some of the Bitcoin industry’s best-known individuals such as Twitter CEO, Jack Dorsey, Tesla and SpaceX angel investor Bill Lee, Robinhood co-founder Vlad Tenev, and Litecoin creator Charlie Lee. Blockstream CSO Samson Mow continues their bullish take on Lightning also. Lightning still has to grow and mature, but those developers building wallets and other Lightning applications see this as the true beginning of the layer-two payments network. It is not recommended users put large amounts of money into the system quite yet, as this release is mainly for developers and more advanced users who have no problem with command-line interfaces. But it is the start of big things to come!
As the general public continues to become aware of emerging blockchain and cryptocurrency technologies and their potential, more and more people are becoming involved. The December 2017 explosion of new participants in the crypto-space forced many exchanges to close their doors to new users because of server accommodation constraints and lengthy verification processes. The boom was just a small blip on the radar compared to what the future may hold, and gave service providers a heads-up as to exactly how unprepared they are if/when cryptocurrency really takes off!
It has long been discussed that Wall Street’s eventual decision to adopt cryptocurrency will have massive market implications. The larger financial institutions stance on cryptocurrencies is closely viewed as a probable indicator of growth and wider adoption. With more and more major players in the space learning about cryptocurrencies, like Goldman Sachs and JP Morgan, the question is not if they will invest, but when will they invest.
These and more major developments regarding blockchain technology, cryptocurrency regulations, and public adoption are sure to increase in 2018. This is why, as a Bitcoin hodler, I plan to stay informed, continue to acquire, and HODL as crypto continues to emerge and mature.  And no – I am not the least bit worried or concerned about my investment. I’ve not invested more than I can afford to lose, and the potential reward is well worth the risk 🙂

Bitcoin is extremely volatile. It has at least a 20% correction once every three months. Bitcoin has had a 30% or more correction 12 times in the last four years. Volatility means that an asset is risky to hold—on any given day, its value may go up or down substantially. One of the reasons why it is not advised to invest your life savings in Bitcoin – or any amount that you could not lose and avoid affecting your lifestyle. 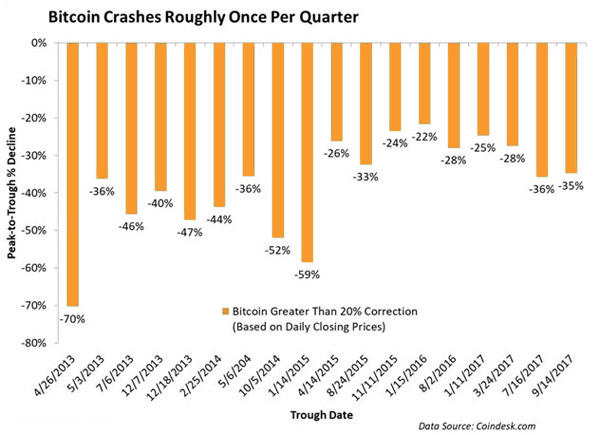 In comparison, the volatility of gold averages around 1.2%, while other major currencies average between 0.5% and 1.0%.

So how can this volatility be profitable? By using mean-reversion strategies to capitalize on the spread between buy and sell prices that are very profitable in high volatility markets. Such strategy applied to Bitcoin trading can improve the performance of a buy-and-hold strategy. Since a mean-reversion strategy is independent of the market level, it can add an independent performance to a buy-and-hold strategy. As an example, the strategy could use 1% of the portfolio assets and then aim to earn an additional 1% per day on this part of the portfolio. Historically, this strategy would have added 24% per year to the portfolio performance.

Of course, Bitcoin returns do not follow a normal distribution. So what is the likelihood that a trader could both buy and sell Bitcoin over the course of 10 days and earn 1% each day?  Based on statistical data, this strategy would have been successful in 2297 out of 2615 days, or 87.84% of the time. (Read the full article.)

The strategy of this Bitcoin hodler is simple – let expert traders do the work so I can acquire more cryptocurrency, and occasionally make a trade on my own. I sell a small amount of cryptocurrency when I feel it has reached a high and is going to drop – then I buy it back plus more when it reaches what I believe is the “dip”. Doing this takes a tremendous amount of time, effort and research – and it is stressful each time I make a decision to sell.  Following Tone Vays daily for over a year has been my best source of education, but there are several other traders I have come to respect. Tone tells it like it is vs. what you’d like to hear, and watching his daily briefing has helped me learn how to read technical charts. I continue to learn but still nowhere near the point of day-trading with a large amount of money.

I am content to keep earning and stacking Bitcoin – and now Ethereum – because I believe it will pay off in the future.

This post represents my own personal experiences and practices. It is not to intended to be financial advice on any level. I am not a financial advisor, only a bitcoin hodler sharing my own strategy so others might learn from my mistakes or successes. Do your own research, and understand that cryptocurrency is an investment that comes with risk. Never invest more than you can afford to lose, or money you’re going to need in the near future – as there are no guarantees in this space where one is 100% accountable for their own actions.